A scholarship from home opens a world of opportunities

Conor McCabe '18 in the Engaged Cornell Hub in Kennedy Hall, which houses nine programs and units supporting Cornell's mission of public engagement. He was one of the first Engaged Cornell student leaders. Photo Credit: AAD Staff
By Kate Blackwood May 22, 2018

Conor McCabe ’18 grew up on a farm in West Linn, Oregon, 20 miles south of Portland. He helped his family raise pigs and cattle and grow pumpkins and Christmas trees. He was also deeply involved in 4-H. McCabe’s early interest in agriculture and life sciences led him to Cornell, where a world of opportunities opened up for him.

“I’ve studied the dairy industry in Italy. I’ve experienced the impacts of climate change in southern Vietnam, in the Mekong Delta, and I’ve had the opportunity to preserve indigenous knowledge of the Penan in Malaysian Borneo,” he said.

Learning beyond the classroom

An animal science major (with a focus on dairy cattle) in the College of Agriculture and Life Sciences, McCabe learned much from classes about international development and crops. A course called Tropical Cropping Systems, for example, focused on oil palm, rubber, tropical fruits, and rice, providing a knowledge base McCabe believes he will use in his future career.

He has also been active in the Cornell University Dairy Science Club, the Block and Bridle Club, and CALS Ambassadors, but his Cornell education also extended far beyond the classroom and campus. As early as his first year at Cornell, McCabe attended meetings of the American Dairy Society and the American Society of Animal Science, some of the biggest meetings pertaining to livestock in the world.

I’m reaping the benefits of academics, experiences, and affordability. Upon graduation, I’ll have half the student loans I would have had. It’s really setting me up to be that much further ahead.
—Conor McCabe '18

He later augmented his studies through the Cornell Cooperative Extension program, working for one summer in St. Lawrence County in the far north of New York. Together with local farmers, he researched how management practices could reduce parasites and improve the health and performance of animals.

“I saw the impact that the extension has on rural populations,” he said.

Through the Dairy Fellows Program on campus, he also traveled to Albany, Plattsburgh, and other places to get a first-hand look at innovations in the New York State dairy industry.

His academic advisor, Mike Van Amburgh, “has been extremely supportive” of his off-campus learning, said McCabe.

McCabe’s varied experiences, both on campus and off, made him a natural fit for a student-leadership role with Engaged Cornell, an initiative seeded in 2014 that fosters community-engaged learning among Cornellians.

Mike Bishop, director of student leadership in the Office of Engagement Initiatives, said McCabe was part of a “start-up” advisory group composed of 24 students, which helped shape the Certificate in Engaged Leadership curriculum in 2016. McCabe also served for two years as an Engaged Ambassador, one of ten students who facilitate dialogues, distribute financial resources, market the program, and mentor current participants. Engaged Ambassadors also provide feedback that continues to develop the program.

“Conor has been a role model to the other Engaged Ambassadors, embodying the ethos of engaged leadership that our office promotes,” said Bishop. 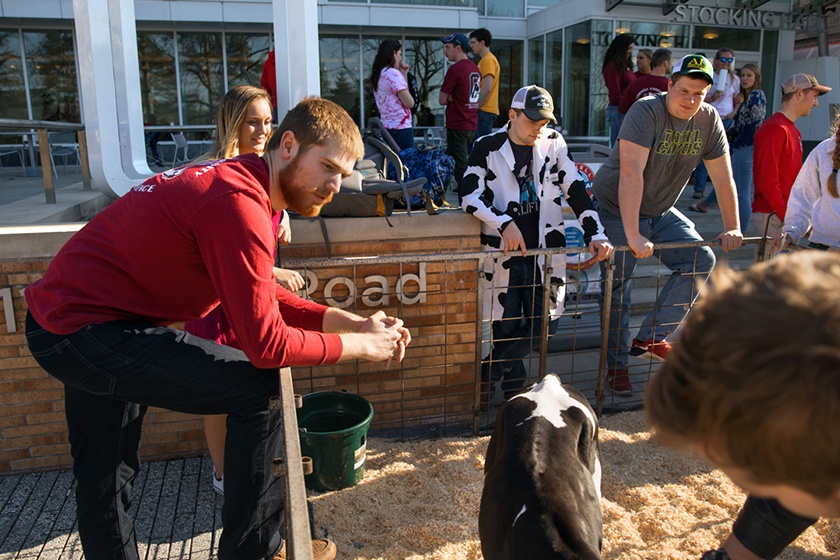 Hoffmann led the January 2017 climate change study that gave McCabe his learning opportunity in Vietnam. And, in March, Hoffmann nominated McCabe to travel to Washington, DC, to advocate for increased federal funding of land-grant university extension programs—the same programs he benefited from, growing up in Oregon and studying at Cornell.

Taking it into the world

McCabe’s agricultural education began at home in Oregon. His subsequent journeys at Cornell, throughout New York State, and in far-flung parts of the world were aided by grants, including one funded by alumni back home—the Cornell Club of Oregon. In fact, this and other need-based financial aid made Cornell more affordable for McCabe than his state university.

“I’m reaping the benefits of academics, experiences, and affordability,” he said. “Upon graduation, I’ll have half the student loans I would have had. It’s really setting me up to be that much further ahead.”

McCabe’s international research experiences, together with Cornell Extension projects in New York State and community engagement programs on campus, have inspired him to pursue a career in improving agricultural systems after graduation.

I’ve studied the dairy industry in Italy. I’ve experienced the impacts of climate change in southern Vietnam, in the Mekong Delta, and I’ve had the opportunity to preserve indigenous knowledge of the Penan in Malaysian Borneo.
—Conor McCabe '18

As soon as McCabe graduates, he will be off on more agricultural learning experiences. He will spend ten weeks in Kalamazoo, Michigan, doing animal health research with Zoetis, a producer of medicines and vaccinations for pets and livestock. Then, in August, he will begin a one-year fellowship in Liberia with AgriCorps, which connects American agricultural professionals with education opportunities in developing countries. McCabe will serve as an extension agent, 4-H leader, and agricultural teacher. His fellowship will focus on how to integrate youth into agricultural programs and motivate them to pursue careers in food and agriculture.

“I’ve been thinking about the role agriculture plays in development,” said McCabe. “I want to have the opportunity through education to show people where agriculture can take them.”

Choose the school or college that means the most to you from across our seven undergraduate colleges and four graduate and professional units.