At $100,000 and growing, the fund supports programming for the 55-resident house.

Julio Casado ’08 lived in the Latino Living Center his second year at Cornell. The LLC, as it is known, was a comfortable place where he made friends and had relevant conversations: “It felt like a place I could call home,” he says.

The residence also expanded his understanding of Latino identity, he says, to include people from many different parts of Latin America. Casado has roots in New York City, where his own Dominican heritage intertwined with Puerto Rican and black culture.

Students living at the LLC learn from each other, says Ricardo Arguello ’04, another LLC alumnus. The broader Cornell population can also tap into the intercultural exchange, he said, through weekly “Café con Leche” programs and other events.

“The LCC played a vital role in my success at Cornell,” says Arguello. “Cornell became my home, but the LLC became mi casa.” The LLC serves as a home base for residents, as well as an on-campus cultural center for the Latino community.

Foundation for the future

Arguello and Casado, together with Mario Rivera ’82, established the Lambda Upsilon Lambda Latino Living Center Endowment Fund to support the 55-resident program house. This spring the funding drive reached its goal of $100,000.

“I was truly honored and humbled to see the Latino community come together to ensure the success of the endowment,” says Arguello. “The goal is to continue to support the LLC and the endowment for the foreseeable future.”

This is the first endowment at Cornell established for an identity-related program house. Cornell has 11 program houses, which build communities around a culture, identity, or interest area.

“Creating a sense of belonging is integral to Cornell, and the Latino Living Center does just that,” he says. “The LLC incorporates affinity and culture with an on-campus living experience, inspiring student growth and involvement.”

The LLC endowment will be used at the discretion of the house’s resident director to fund programming and other activities that make the living center, located in Anna Comstock Hall, an important hub of activity and solidarity for Latino students and alumni.

A demand and a hope

The Latino Living Center was born out of protest. In November 1993, repeated vandalism of on-campus artwork by Los Angeles-based artist Daniel Martinez inspired more than 120 Latino and African American students to occupy Day Hall, as reported in a Nov. 20, 1993 New York Times article. The protesters, led by Eduardo Peñalver ’94, who is now dean of Cornell Law School, presented administrators with a list of demands, including police protection for the defaced artwork, increased academic resources for Latino studies, and the creation of a Latino-focused living center.

“Our hope was to create a living and learning space for students to come together around a shared interest in Hispanic culture and the issues facing Latinos and Latinas on campus and around the country,” Peñalver says in an email written this month. “In the early 1990s, Latinos/as were becoming more visible as a distinct group on campus and in our polity, and we wanted to create a physical space that would reflect what we saw as our growing significance as a community. The new LLC endowment complements that motivation very nicely.” 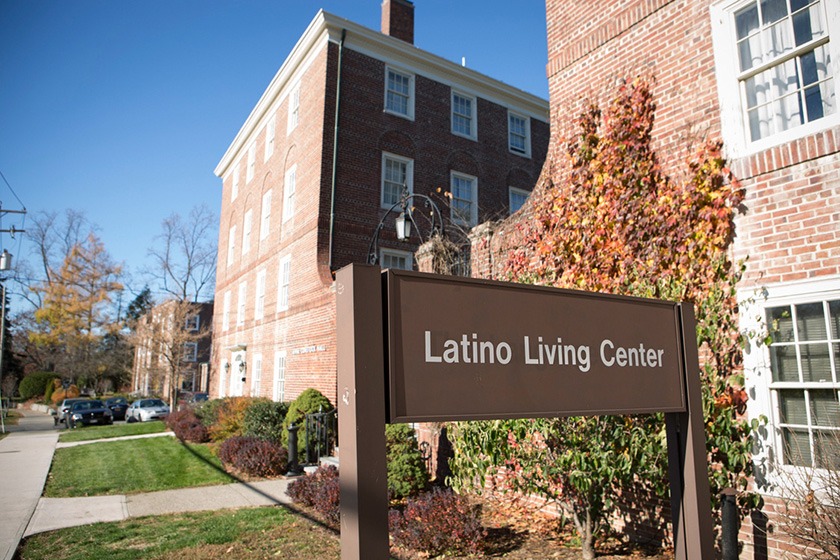 In 1993, the students’ original proposal was for a living center on one floor of a West Campus dorm: “In that sense, the LLC as it is today exceeds our vision,” says Peñalver.

“I want to applaud Julio Casado for his vision and tenacity in bringing this endowment to life. This endowment would not exist without the hard work of Julio, the alumni who supported the effort, and the generosity of the many donors to the fund.”

In an environment in which programs across the university compete for limited funds, the LLC endowment is significant, Peñalver says, because it provides dedicated funding to address both the interests of the residents and the needs of the physical plant.

More than a fundraiser

The recent endowment drive raised more than money, says Julio Casado. The effort focused attention on the university’s program houses, which comprise what he calls a “critical element”  of university life for underrepresented minority communities. The endowment has also unified members of the Latino alumni community around the LLC project, reconnecting many of them to Cornell for the first time in years.

“We wanted to inspire other alumni to give back to the Cornell community,” says Mario Rivera.

So far, more than 50 donors have contributed to the endowment, and it remains open to new contributions. Special support came from alumni of La Unidad Latina, Lambda Upsilon Lambda (LUL) fraternity. The fraternity was founded at Cornell in the 1980s, stays active in the university’s Latino community, and has close ties to the LLC. 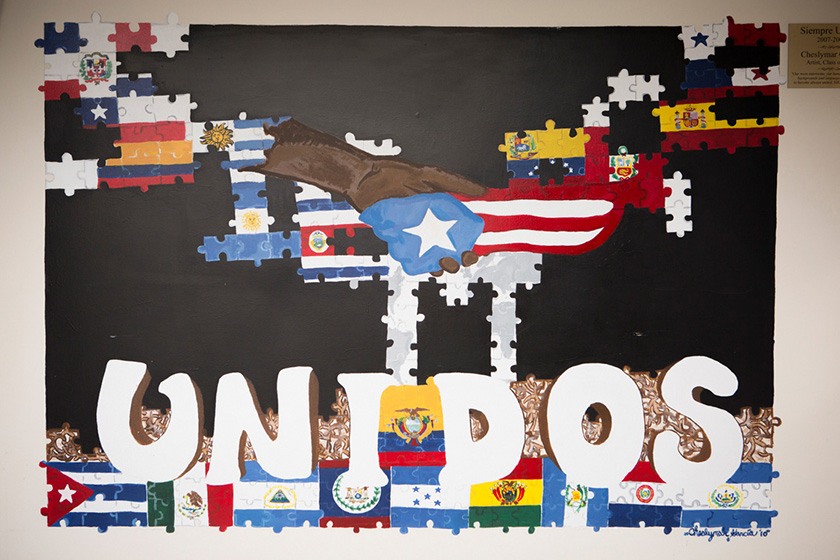 Artwork on the wall of the Latino Living Center Photo: Lindsay France/Cornell University

“LUL was founded on a belief that we should care about those coming after us,” says Rivera, one of the fraternity’s founders. “The endowment is essentially an extension of our beliefs.”

The Cornell administration has been actively involved with the fundraising process and the administration of the fund. Matt Carcella, director of Diversity Alumni Programs, applauds the endowment drive as a group effort. And Vice President Lombardi is grateful to the members of Lambda Upsilon Lambda and the alumni who supported the effort.

“The example set by these dedicated alumni affirms the power of the Cornell experience and establishes a strong foundation from the moment Cornellians arrive on campus,” he says.