As part of Cornell’s To Do the Greatest Good campaign, the university launched an initiative to make a Cornell education even more affordable for talented students from all socioeconomic backgrounds.

The university has committed $50 million to match undergraduate affordability endowment gifts of at least $250,000, or gifts of $150,000 or more from alumni who have graduated in the last 20 years. Gifts that meet these criteria will be matched at a 1:2 ratio ($1 match for every $2 given), increasing the impact of each gift and directing more funds to support undergraduate students.

Several donors have already made gifts as part of this opportunity, establishing scholarships that will make a significant and lasting difference for Cornell students.

I hope that whomever receives the scholarship can be inspired to donate back to the school after they start working.
—Ran (Andy) Zhao '12

Ran (Andy) Zhao ’12 established a scholarship for students in the Cornell Ann S. Bowers College of Computing and Information Science with a gift of $150,000. The scholarship will receive an additional $50,000 from his company and an additional $100,000 from university matching funds, effectively doubling the impact of the donation. Andy’s gift was the first to utilize the affordability matching challenge within Cornell Bowers CIS, and he says the challenge inspired him to increase the amount he pledged.

“Even without the match, I would have made a commitment to establish the scholarship. But the matching program encouraged me to put a little extra money into the scholarship up front, which is something I might not have done right away,” he says.

Andy received financial aid as an undergraduate student at Cornell, and he was able to meet the donors behind one of the scholarships he received. That meeting, he says, was “a really memorable experience,” solidifying his decision to give back to Cornell as soon as he started working. Andy hopes to inspire future Cornell engineering and computer science students to pay it forward in the same way, encouraging a culture of philanthropy.

“I hope that whomever receives the scholarship can be inspired to donate back to the school after they start working,” he says, “not as an obligation—but as a really feel-good thing to do.”

He encourages other recent graduates to give what they can, sharing from his own experience that giving through appreciated company stocks can be a tax-efficient way for some younger alumni to make bigger contributions earlier in their careers. “The earlier you donate, the earlier you can start to feel like ‘Hey, I’m making an impact!’ That’s a good feeling to have,” he says.

Now a senior software engineer at Google, Andy shares that his Cornell experience has had an impact on his life in many positive ways. The classes he took crossed disciplines and helped him develop a strong understanding of finance, business, and investments. He notes that the professors in his major of computer science were “all amazing people” who helped him succeed.

Andy plans to continue supporting the university financially whenever he is able, and says supporting Cornell instills in him the feeling that his gifts can help “do good for society.”

The greatest good I can do at this stage in my life is help finance a bunch of whip-smart kids who could use some assistance to get them through a great school.
—Douglas Madison

Douglas Madison established a scholarship in 2020 in honor of his father and aunt, who both attended Cornell. This fall, he gave an additional $250,000 to endow the Edward Madison ’52 and Charlotte Devers-Wallace ’44 Undergraduate Scholarship, which will be matched with $125,000 in university challenge funds.

While not an alumnus of Cornell himself, Douglas says he feels passionate about the difference education can make, and knows Cornell students of all disciplines can go off to change the world.

“The greatest good I can do at this stage in my life is help finance a bunch of whip-smart kids who could use some assistance to get them through a great school,” he says.

Douglas’ father Edward Madison ’52 and aunt Charlotte “Sherry” Devers-Wallace ’44 talked about their time at Cornell with Douglas and his brother, and consistently shared that it was a very welcoming community and excellent school. Edward had a strong belief in community service and giving back—culminating in a bequest left to Cornell after his death in June 2020.

“My dad and his sister were both very civic-minded,” Douglas says. “The concept of giving back was very much inculcated in us.”

His father’s bequest led Douglas to explore giving options of his own at Cornell, and the establishment of the Edward Madison ’52 and Charlotte Devers-Wallace ’44 Undergraduate Scholarship.

“It gives me pleasure to give back. My father and Aunt Sherry would be delighted to have their names on such a thing,” Douglas says.

This scholarship will support students attending any of Cornell’s schools and colleges, pursuing any major. “I don’t think it should be limited,” Douglas says, noting that the study of any field can be useful. His own career on Wall Street, he says, was well-served by his study of literature and history at the University of Colorado. “If somebody wants to go off and study Shakespeare, it’ll come back to help.”

“Cornell, it seems to me, is a school that really excels at bringing in a diverse group of people,” Douglas adds. “That is the meaning of higher education: to break down the barriers and give people who wouldn’t necessarily have a crack at it a chance.”

Giving a young individual the opportunity to attend Cornell, when otherwise they may not have been able to afford that, is changing the trajectory of their life.
—Dr. David Rosenberg '89, MD '93

Dr. David Rosenberg ’89, MD ’93 and Dr. Jessica Lattman ’90 have many Cornell connections in their family, beyond their own time on the Hill. Two of their three children are now Cornellians: Samantha Rosenberg ’24 and Alexandra Rosenberg ’21. Jessica’s mother, Michelle Lattman ’63, MA ’64, is also a Cornellian, as are David’s father, Dr. Paul Rosenberg ’59, and his brother, Mark J. Rosenberg ’86. Their nieces also attend Cornell.

“It runs deep in our family,” says David. Both he and Jessica have remained heavily involved since their graduation, volunteering on boards and advisory councils, hosting Cornell events at their home, and mentoring students.

In addition to giving back with their time, they have loyally supported the university philanthropically for many years—including the creation of three scholarships.

Jessica and David gave another generous gift this fall to enhance one of the scholarships they started. The recent gift will take advantage of the university’s matching challenge to increase the amount of support the scholarship can provide for students.

“We feel that the surest way to achieve one’s utmost potential is through education,” David says. “We have an opportunity to truly change the trajectory of individual lives by creating these scholarships.”

“As a mom, to give another parent that opportunity,” says Jessica, “to give that gift of education to a parent—to give them the opportunity for their child to have a Cornell education—means a lot to me. As a parent, it’s such a powerful thing to see.”

Jessica notes that Cornell not only set herself and David on an excellent path for their careers, but brought other involvements and memories she cherishes—like taking classes outside of her pre-med requirements and participating in Cornell Outdoor Education courses.

“The diversity of experiences there was what really stuck out in my head,” she says, noting that their daughters have now had similar experiences at Cornell, taking classes they are passionate about and trying new things.

Both Jessica and David agree that giving back—whether it be by making a scholarship gift or smaller gifts to programs that have meant a lot to their family—allows them to ensure other students have the same positive Cornell experiences.

“We’re surgeons,” David says. “We touch people for moments in time, and the rest of their lives change for the better. This scholarship is like that. Giving a young individual the opportunity to attend Cornell, when otherwise they may not have been able to afford that, is changing the trajectory of their life. That touching of an individual’s life path is very powerful. Everything that follows in their life stems from their education and experiences at Cornell.” 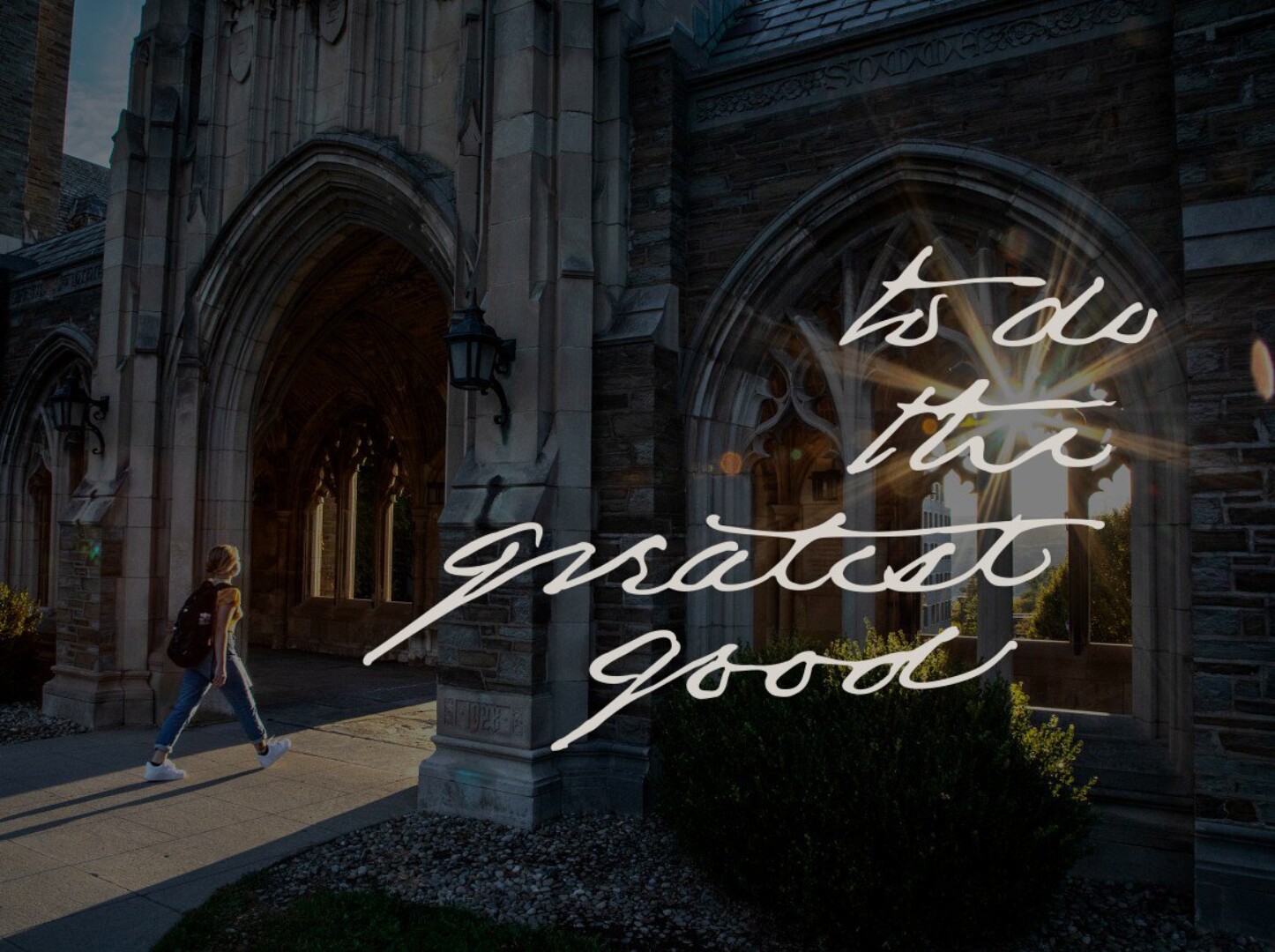 Cornellians learn not only to thrive in their own lives and careers but to lead in a changing world. Committing to our students—welcoming, educating, supporting, and developing “any person”—is the most profound commitment we can make.