A champion of planned and estate gifts for Cornell, Margaret Newell Mitchell ’47 had a knack for making people laugh, even—or, colleagues would say, especially—about death.

“Undertaker Mitchell is my name, and planning for the end of life is my game,” she quipped in a Western-themed skit at the Cornell Annual Funds breakfast in 2011. “Unfortunately, I don’t get much repeat business.”

For over a decade, Mitchell played a prominent role in the yearly skit held by staff and volunteer fundraisers. From Obi-Wan Kenobi of Star Wars to Little Red Riding Hood to Ginger of Gilligan’s Island, she wore each ill-fitting robe, coat, and wig with conviction.

And, at the end of her scene, Mitchell always found a way to sneak in her unofficial tagline about those honored by Cornell as members of the Cayuga Society for including the university in their wills: “You can give away the cow and still keep the milk—until you kick the bucket!” 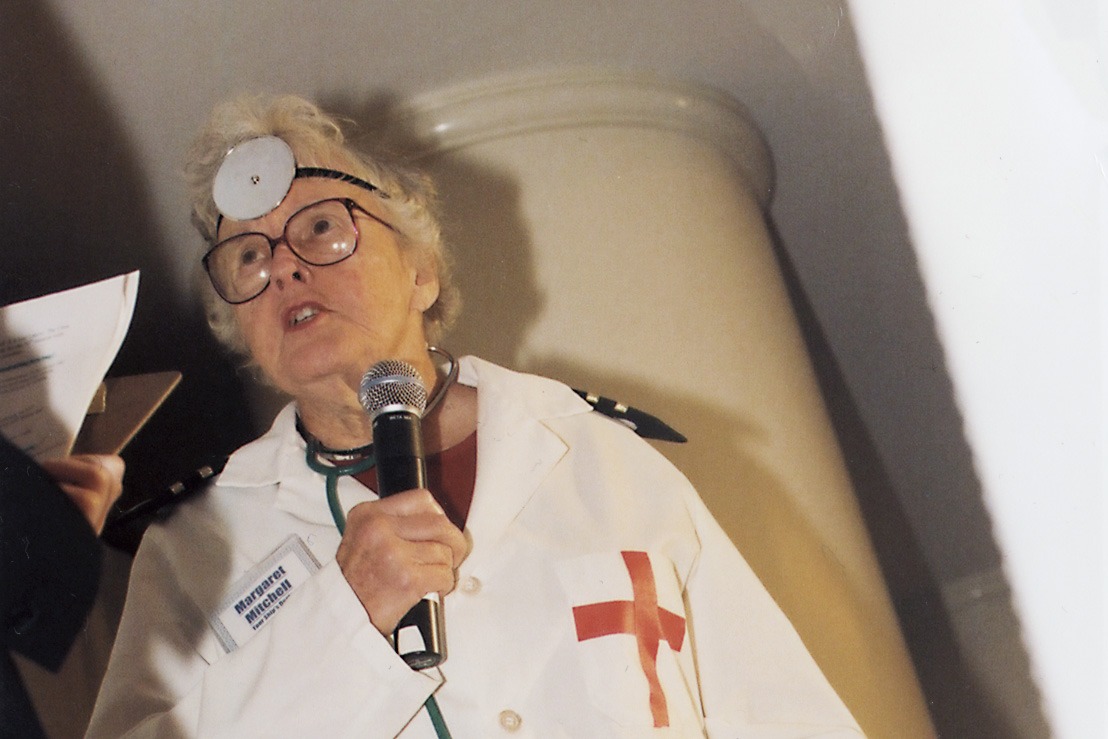 Mitchell as a doctor in 2001. Photo: Frank DiMeo 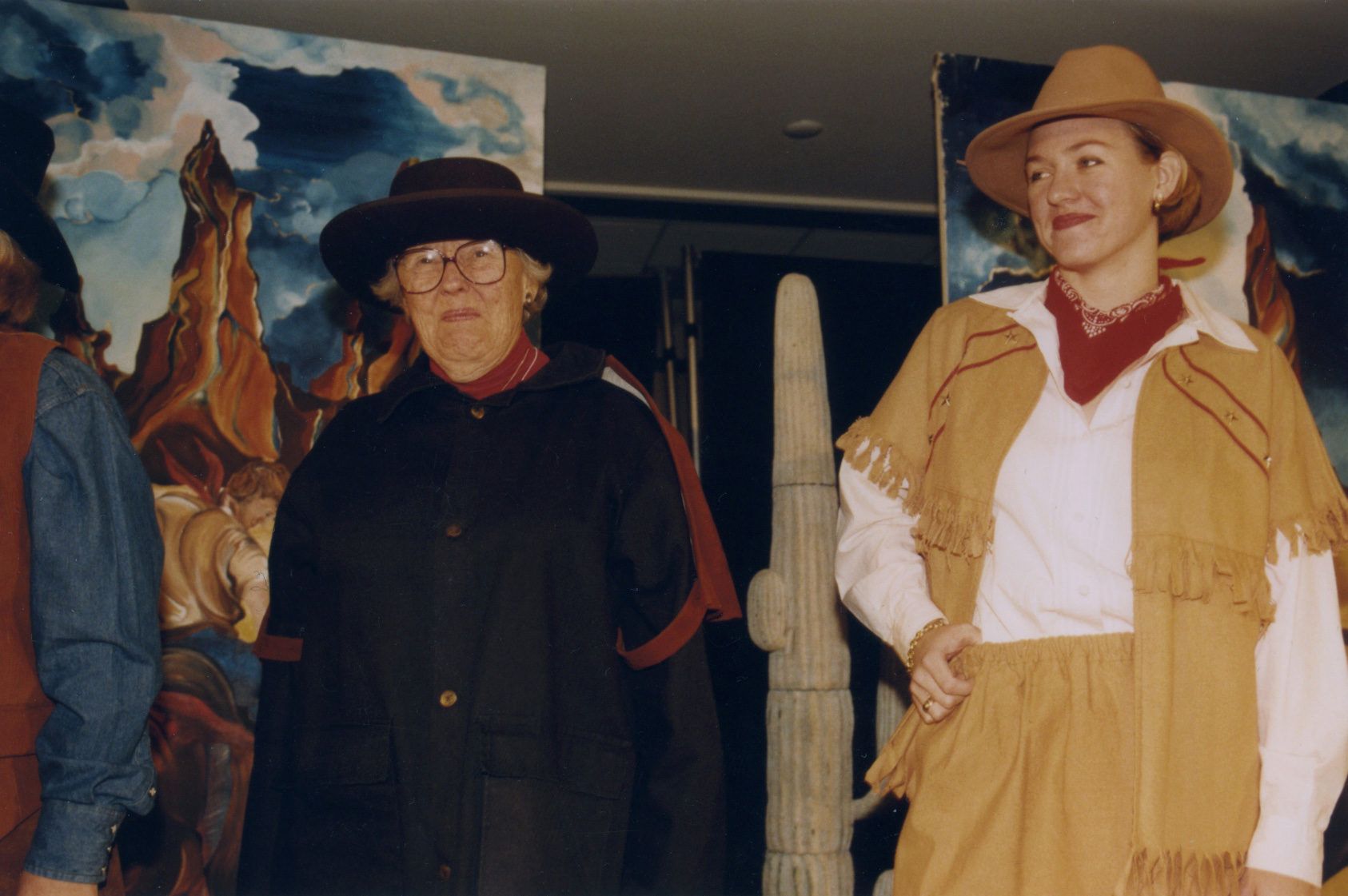 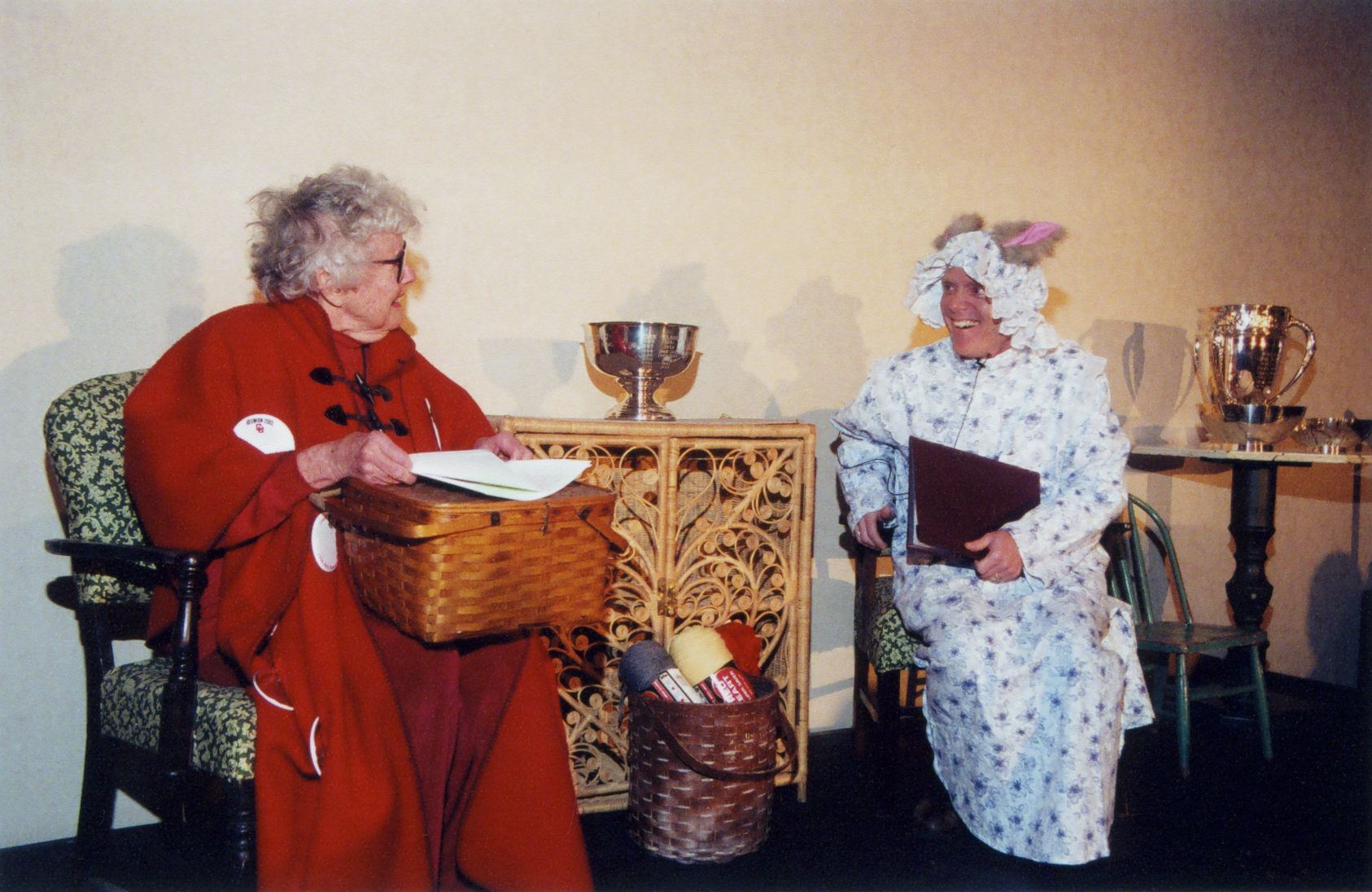 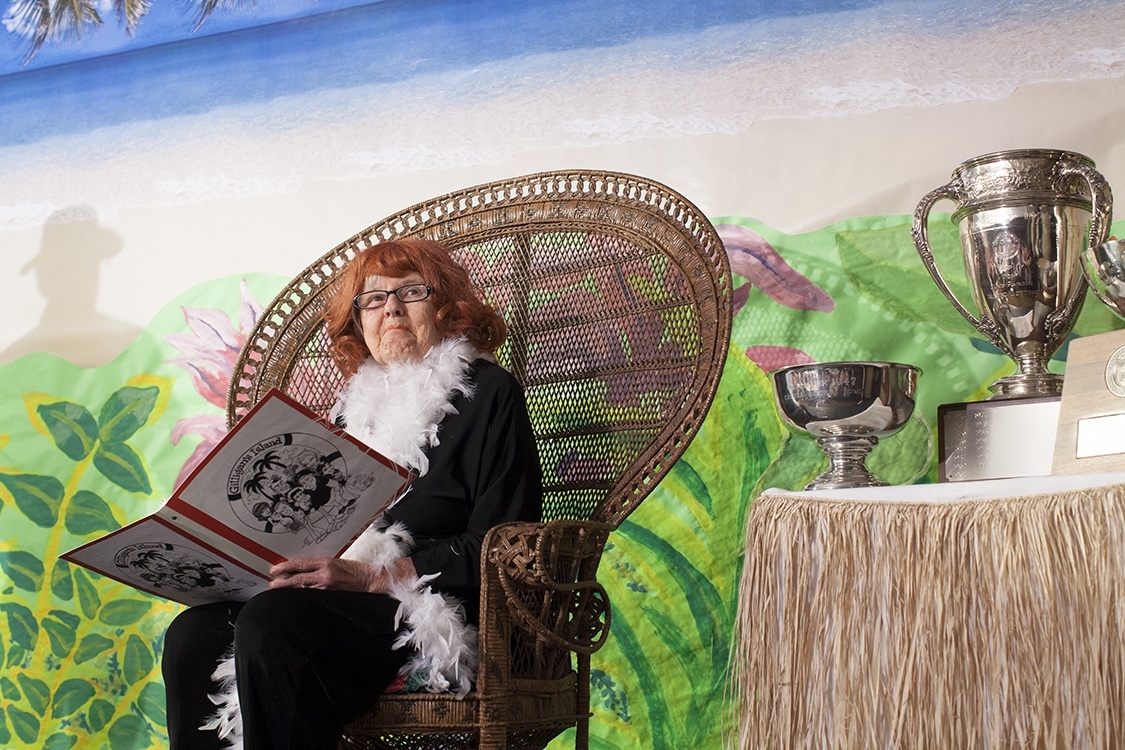 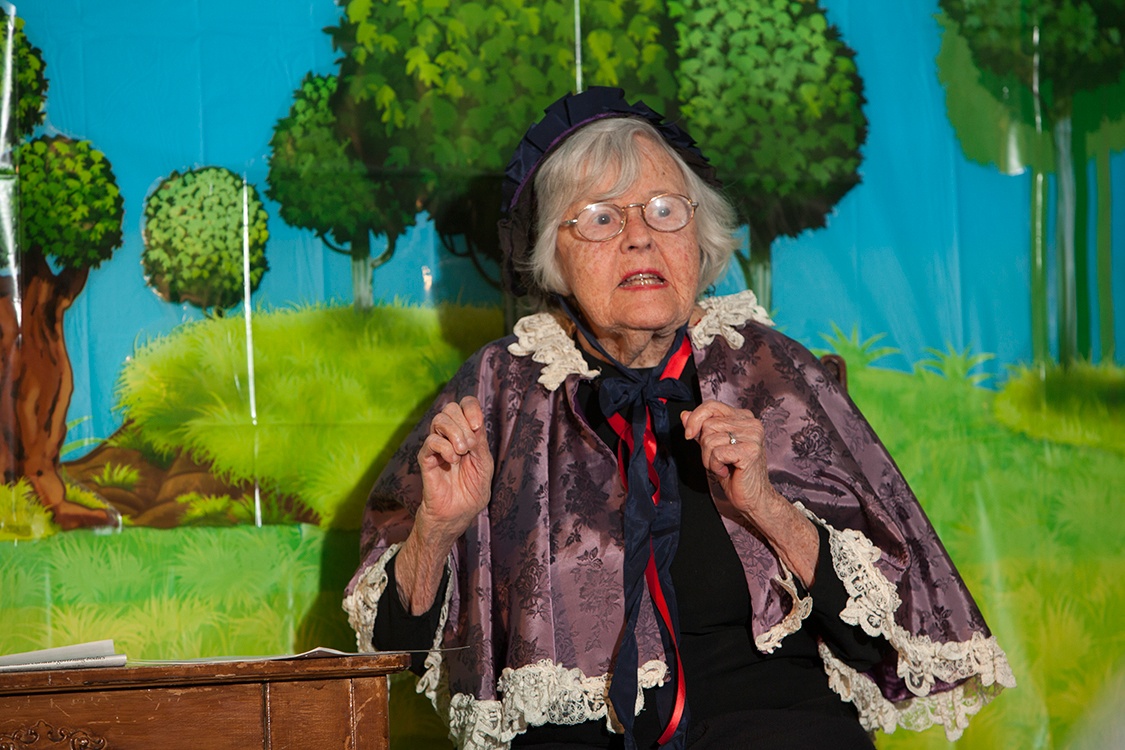 At 92, Mitchell passed away in her sleep on Christmas Day in 2017, but her humor and her passion for Cornell continue to rouse colleagues and friends at the university.

“She would march into a hurricane and keep going straight ahead,” said Chip Bryce ’81, Cornell’s director of Trusts, Estates, and Gift Planning. “She was a force, a complete force.”

Bryce credits Mitchell—along with trustees emeriti William Phillips ’51 and Robert Cowie ’55, MBA ’57—for pushing for the creation of Cornell’s own legacy-giving recognition circle, the Cayuga Society, in 1993. The three volunteer leaders were also the first members of the society, which is now more than 4,000-strong.

Mitchell, according to Bryce, was the charismatic “aunt next door” who helped raise awareness about the Cayuga Society, even among Cornellians with modest means.

“She emphasized that you don’t have to be a multimillionaire to be able to do something good for Cornell, and that really resonated with people,” added Brenda Teeter, associate director of Reunion volunteer giving initiatives.

Teeter praised Mitchell’s dedication as the co-chair of the Cayuga Society, and also pointed to the different parts of the university she served, including the Cornell University Council, the Cornell Club of Northeastern Ohio, and the Class of 1947. Mitchell was honored with the Frank H. T. Rhodes Exemplary Service Award for her volunteer efforts at Cornell, and she and her husband, William Mitchell, were recognized as Foremost Benefactors for their generosity to the university.

“She really was special,” Teeter said. “It goes without saying how much we’ll miss her and how much we appreciate all she’s done for the university and for her class.”

Born and raised in Westfield, New York, Mitchell grew up during the Great Depression. Her father died when she was 14 years old, leaving her mother as the sole breadwinner. But Mitchell’s quick wit and perspicacity opened doors. A valedictorian at her high school, she earned a scholarship to Cornell, where she studied nutrition in the School of Home Economics (now the College of Human Ecology) and graduated, again, as valedictorian.

After Cornell, Mitchell earned a graduate fellowship to Harvard and later became a public health nutritionist for the state of Virginia. She and her husband eventually settled in Cleveland, Ohio, where she helped in the family business and balanced her duties as a mother to five daughters and as a volunteer in the local community and for Cornell.

Meg Weingart ’78, one of three daughters who attended Cornell, remembers her mother’s frequent and busy visits to Ithaca for council meetings while Weingart was still a student. “I would barely see her,” she said, laughing.

Mitchell was a role model for Weingart and her sisters, both for their mother’s unflagging volunteer efforts and her philanthropy. “She gave to causes that she thought would make a difference,” Weingart said.

At Cornell, these included scholarships and graduate fellowships, particularly in the field of nutrition at the College of Human Ecology. “The generosity of other people made it possible for her to come to Cornell, so she always wanted to give back,” Weingart explained.

In tribute, Weingart named a graduate fellowship in nutrition after her mother and also created her own undergraduate scholarship.

Francille Firebaugh, former dean of the college who retired and moved to Columbus, Ohio, has cherished Margaret and William Mitchell for their support as well as their friendship. In particular, Firebaugh and her husband bonded with the Mitchells over the same wedding anniversary, apart from their shared love for Cornell.

“We met for anniversary dinners over the years, whenever we could arrange them. Our conversations always included a ‘catch-up’ on the College of Human Ecology—especially nutritional science—and Cornell, in general. John and I both greatly miss Margaret,” she said.

For Weingart, one of the occasions she misses the most are the skits where her mother would make her legendary appearances.

“To us family members, she was just mom, but she was so much more to many people. She did so many things with her crazy intelligence,” she said.

Watching Mitchell on stage always filled Weingart with pride: “I got to say ‘That’s my mom!’ to the people at my table.” 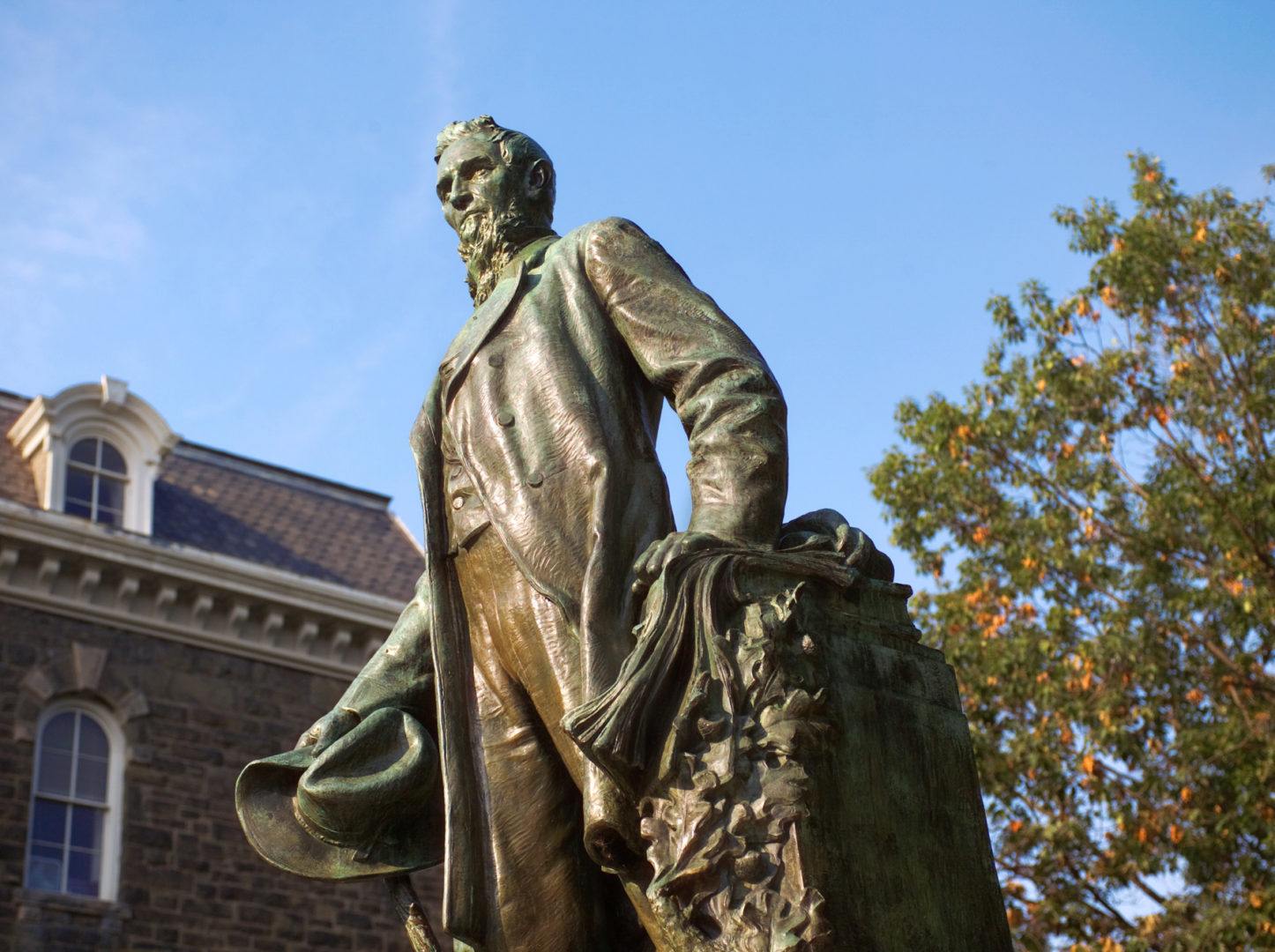 Meet your financial goals while helping Cornell. Smart plans can help you earn income, pay fewer taxes, and provide for others.