Boucher raises two shakas in triumph after completing a hike in Waipio Valley in her hometown of Waimea, Hawaii.
By Linda Copman May 9, 2019

Sofia Boucher ’19 began her Cornell career in the College of Arts and Sciences, but transferred to the Industrial and Labor Relations (ILR) School in the spring of her sophomore year. She was drawn to ILR because it provided a balance between the practical and the theoretical, and because the ILR major offered a solid foundation in the fields of business, history, and law. “I have always been passionate about social justice and the systemic study of inequality, something which I didn’t know could be encapsulated in a degree,” she says.

The deciding factor in Boucher’s choice to attend Cornell was the university’s financial aid package. “Other schools offered me generous scholarships and packages with a combination of merit- and need-based aid, but none even came close to what Cornell provided,” Boucher says. “Cornell’s need-blind admissions process for a full-ride package was what I needed to be able to feasibly attend university.” Boucher is the recipient of the R. Worrell I and C. Wright Scholarship from the ILR School, as well as a Pell Grant, NYS Tap Grant, and a Cornell grant.

ILR has allowed me the space to be unsure—in the best possible way—by being multi-faceted and interdisciplinary.
—Sofia Boucher '19

Boucher has dual goals: to establish a solid career which will provide for her future family and to find an outlet for her passion for justice. The ILR degree offered Boucher the right mix of both. “ILR has allowed me the space to be unsure—in the best possible way—by being multi-faceted and interdisciplinary,” she says. Boucher is eager to explore the multiple doors that are open to her after graduation, in business, the non-profit sector, law, or some combination.

Looking back at her Cornell career, Boucher’s favorite class might be a surprise: “Versions of Versailles,” a course on the role played by the château in the course of French history. Boucher enrolled in this upper-level course as a freshman, along with about 20 upper-classmates and graduate-level students who were “nutty enough to take a course entirely about the historical significance and modern influence of Versailles.” “I’ve always been fascinated by European history and find myself watching obscure BBC drama series about different monarchies in my spare time,” she says. This course seemed like a fun opportunity to indulge her curiosity.

This professor defined my perception of higher education and the eccentricity and love of knowledge that I would encounter over the next four years.
—Sofia Boucher '19

She admits that the professor, Mitchell Greenberg, Goldwin Smith Professor of Romance Studies, is what made this class memorable. Greenberg’s lectures drew entirely on his breadth of knowledge of French culture, literature, and history. “I had no idea what to expect, but was blown away by the professor,” Boucher says. “He never used supplemental materials for lecture, or any material for that matter, aside from a scratchpad with his thoughts and a few videos and pictures on special occasions. This professor defined my perception of higher education and the eccentricity and love of knowledge that I would encounter over the next four years,” she says.

Boucher had the chance to explore Versailles in person on a weekend trip to Paris, during her semester studying abroad in Prague. “I dragged my friends to wait in the three-hour admission line, rewarding them with a ‘simplified’ tour of the palace I had learned so much about,” she recalls with a smile. Boucher had another opportunity to put her arcane knowledge about the palace at Versailles to use, when she visited Bryant Park with colleagues during her internship in NYC last summer. Bryant Park was modeled after the entrance to Versailles, and Boucher relished the chance to share historic insights about the park’s design with her co-workers. 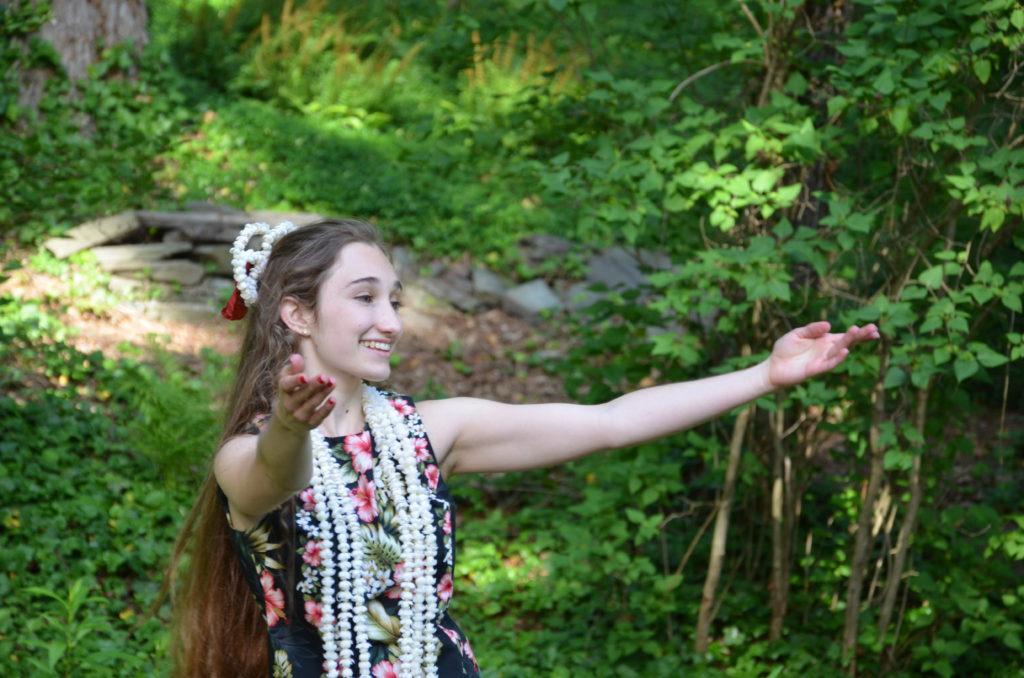 Being able to dance hula even when snow covers the ground …has been especially comforting during my time at Cornell.
—Sofia Boucher '19

Boucher also looks back fondly on her participation in the Cornell Hawaii Club. She was born and raised in Hawaii, and, like many island children, Boucher began dancing hula at the age of five. She thought that moving to upstate New York would be the end of her hula career. “I was pleasantly surprised to find that Cornell actually has a Hawaii Club, whose members are either from the islands or have some familial connection there,” she says. The club hosts a luau at the end of every school year, where members and their friends gather to share Hawaiian food, dance, and music, and bring a little aloha to Cornell’s campus. “Being able to dance hula even when snow covers the ground and temperatures are nowhere near ‘Hawaiian’ has been especially comforting during my time at Cornell,” she says.

Boucher is also involved with various fashion-related happenings on campus, including the Cornell Fashion Collective and Thread Magazine. She has especially enjoyed modeling in three of the Fashion Collective’s past four spring shows. “It’s been great to be part of the design process, from beginning to end, and to be in the show itself—which attracts thousands of attendees every year,” she says.

Cornell will challenge you, teach you, and be the nesting ground for tremendous growth.
—Sofia Boucher '19

Boucher believes that, if not for the aid she received from Cornell, she might have had to take a leave of absence from her studies. Her two siblings both have serious medical conditions, and their care has been an ongoing source of financial strain on her family. “Medical expenses have placed an astronomical burden on my family’s finances and on almost every aspect of our lives,” Boucher says. “The thought has absolutely crossed my mind to drop out and work to help contribute to my family’s bills. But because Cornell invested in and supported my education, I have been able to complete my degree.”

Learning to manage her family responsibilities and still pursue her academic interests, cultivate friendships, and maintain her personal wellbeing has been the defining challenge of Boucher’s time at Cornell. “Balancing all of this, while trying to figure out who Sofia is, has been challenging,” she says.

Boucher believes that her biggest takeaway from her time at Cornell was learning how to maintain balance. She recognizes that academics matter, but not at the expense of jeopardizing her physical, mental, and social wellbeing. “Choosing to prioritize yourself is what keeps you sane and able to take on the never-ending barrage of challenges life presents,” Boucher reflects.

Looking ahead, Boucher hopes to explore a variety of careers and pursue her many interests, “whether that be one at a time or all at once,” she says. Her advice to future Cornell students is to question everything. She cautions them not to simply follow what has been done before, but to challenge the constraints they encounter.

“Cornell will challenge you, teach you, and be the nesting ground for tremendous growth,” says Boucher. “You have to learn to say ‘yes’ to opportunities to invest academically, socially, and personally,” she says.